Radiofrequency ablation (RFA) study is a powerful test to diagnose arrhythmias accurately and help treating them effectively. Unlike many diseases of the heart, arrhythmias are normally hidden or be dormant. They come out and strike only when conditions are favorable for them. Electrophysiology (EP) and RFA study uses advanced computed technology to bring the arrhythmia out of its dormancy and shows how to get rid of it. Radiofrequency ablation is often used in conjunction with implantable cardioverter-defibrillator (ICD) therapy in the presence of recurrent ventricular tachycardia (VT) episodes to reduce the frequency of required ICD therapies. It is something like charming a dangerous snake out of its hole and getting rid of it so that there is no chance of it doing harm at all.

Electrophysiology (EP) in the cardiac field is one of the fastest progressing fields in medicine. Cardiac electrophysiology is the study of the heart’s electrical system, aimed at analyzing, diagnosing, and treating its electrical activities. Normally, the heart pumps 4,300 gallons of blood everyday through the body’s intricate vascular network, and although displacement of blood is its principal function, the heart instigates and finely regulates electrical impulses to create the beats.1,2

A 52-year-old male, Mr. X, with euglycemic and hypertension presented to our hospital with the complaints of recurrent episodes of palpitations for past 8 months duration. He is a known case of AV-nodal reentrant tachycardia (AVNRT) on regular medications. At present, admitted for the radiofrequency ablation procedure (RFA) on 24/01/2020.

On admission, patient is afebrile, no pallor, no icterus, and no pedal edema. A pulse rate of 70 beats per minute and blood pressure, 130/70 mm Hg were noted. CVS – S1, S2 heard, and no murmurs. Respiratory system – normal vesicular breath sound heard. No added sounds (Fig. 1).

The clinical impression was made by the team of cardiologist and radiologist. Features are suggestive for AVNRT (AV-nodal reentrant tachycardia).

After the diagnosis, patient plans for electrophysiology and radiofrequency ablation on 28/01/2020. 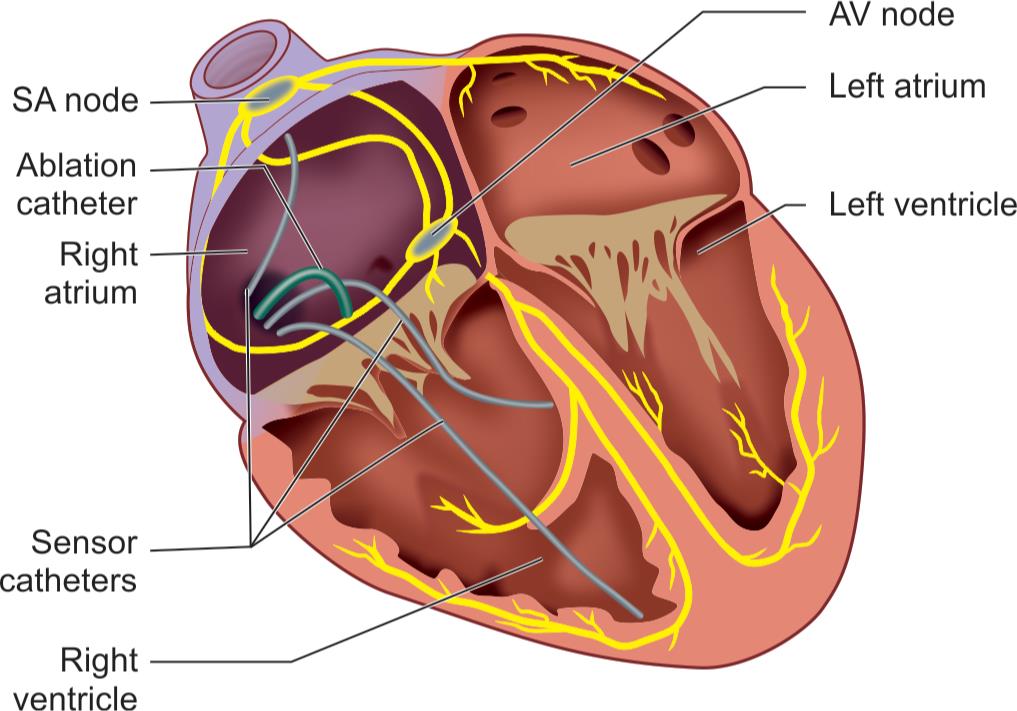 As a part of nursing, management continuously monitored for tachycardia, fever, and hypotension. This is more common and expected. If a fever is above 99°, it is taken as seriously, and the patient may get for blood cultures, CT, drainage, thoracentesis, or antibiotics may be indicated. However, the patient did not have any symptoms.10–14 Physicians planned to discharge on next day itself.

After the RFA procedure, patient shifted to a recovery room and quietly observed for four to six hours to prevent bleeding at the catheter site. Patient’s heart rate and blood pressure were monitored continuously by the staff nurses to check for complications. After one-day observation, patient was discharged on 30/01/2020 with the follow-up medication advice of Tab clopilet 75 mg, Tab. Aztor (atorvastatin) 10 mg, and Tab pantodac 40 mg (pantoprazole).

Patient has been followed up regularly, and prognosis was good. Patient was advised for follow-up for first 3 months and then with the interval of 3–6 months intervals.

An electrophysiology study is a test to measure the electrical activities of the heart and to diagnose abnormal rhythms. The EP study and catheter ablation procedure are considered as safe for the patient. The surgeon gets informed consent from the patient with the adequate information about the complication and the follow-up. The EP study is performed safely on both children and adults, with the age group from 3-month-old to 97-year-old. An EP procedure may take up to 3–6 hours, depending on the patient condition. Patient may feel discomfort during the procedures for that patient may get sedatives, depending on the patient condition and the type of procedure.

Will the Electrophysiology Study and Catheter Ablation be Performed at the Same Time?

How Long Patient will be Hospitalized?

Patient may return to their home on the same day after the procedure has been done or spend 24 hours in the hospital for observation and return home on the next morning itself.20

When can the Patient Start their Normal Day-to-day Activities?

Patient can resume their normal day-to-day daily activities as soon as they leave the hospital, unless they have any restrictions given by the doctor. Do not lift objects for a few days, until the catheter-insertion site heals.

This case has been presented for its rarity. Electrophysiology ablation of cardiac is now a safe treatment for many patients. In many countries, it is increasingly considered as firstline therapy as it is potentially curative nowadays.

3. Durrer D, Schoo L, Schuilenburg RM, Wellens HJ. The role of premature beats in the initiation and termination of supraventricular tachycardia in the WPW syndrome. Circulation 1967;36(5):644–662.

7. Wellens HJJ, Electrical Stimulation of the Heart in the Study and Treatment of Tachycardias, 1971LeidenStenfert Kroese.