A Case Report on Rolandic Epilepsy

Benign focal epilepsy of childhood is an entity that includes characteristic clinical and electroencephalographic manifestations. An epileptic seizure is a transient occurrence of signs and/or symptoms due to abnormal excessive or synchronous neuronal activity in the brain. Epilepsy is a disorder of the brain characterized by an enduring predisposition to generate epileptic seizures and by the neurobiological, cognitive, psychological, and social consequences of this condition. Here we report a case of Rolandic epilepsy or benign childhood epilepsy with centrotemporal spikes (BCECTS), which is the most typical epilepsy, and the child presented with typical symptoms of active seizures in the form of uprolling of the eyes and jerky movements of the upper limbs.

Benign Rolando epilepsy or benign childhood epilepsy with centrotemporal spikes (BCECTS) is the most typical epilepsy. The sylvian epilepsy seizures are caused by the Rolando fissure in the brain (also known as the centrotemporal area, which is located around the Rolandic fissure and identified after Luigi Rolando).1

A 4-year-old male child was apparently normal till 10 pm at night, he woke up mid-sleep and had an episode of vomiting (not bloodstained, nonprojectile, containing food particles, nonbilious), which was followed by uprolling of the eye that is lasting for ~1/2 hour, after which he developed jerky movement of both upper extremities lasting for ~5 minutes, and then the child became drowsy and postictal drowsiness was present. The child was brought to casualty and got admitted to pediatric intensive care unit for further medical management. On examination, the child was in postictal drowsiness with uprolling of the eyes. Following investigations were performed to rule out the cause, such as magnetic resonance imaging (MRI) and electroencephalogram (EEG). The EEG report shows that centrotemporal spikes and sharp waves from both the cerebral hemispheres suggestive of generalized epileptic form discharges and the child was diagnosed with Rolandic epilepsy. The child was advised to continue the antiepileptic drugs—T. Lorazepam (5 mg/twice in a day) and sodium valproate(4.5 mg/twice in a day).The child was hospitalized for 5 days, and parents were counseled regarding the child’s condition, treatment, and management.

Benign Rolandic epilepsy (BRE), also called benign epilepsy with centrotemporal spikes (BECTS), is a type of childhood focal epilepsy characterized by motor focal seizures and specific EEG abnormalities in the absence of neurological deficits. Seizures begin in the Rolandic area of the brain, hence the name “Rolandic;” that is, the part of the brain that controls the face. Partial seizures start in a specific part of the brain and last for a brief span of time. The most common type of idiopathic epilepsy in children is BECTS. The term “idiopathic” has been replaced with “genetic” in the most recent International League Against Epilepsy classification proposal. However, because the genetic marker in children with BRE is unknown, it is most likely genetic (Fig. 1).2–4 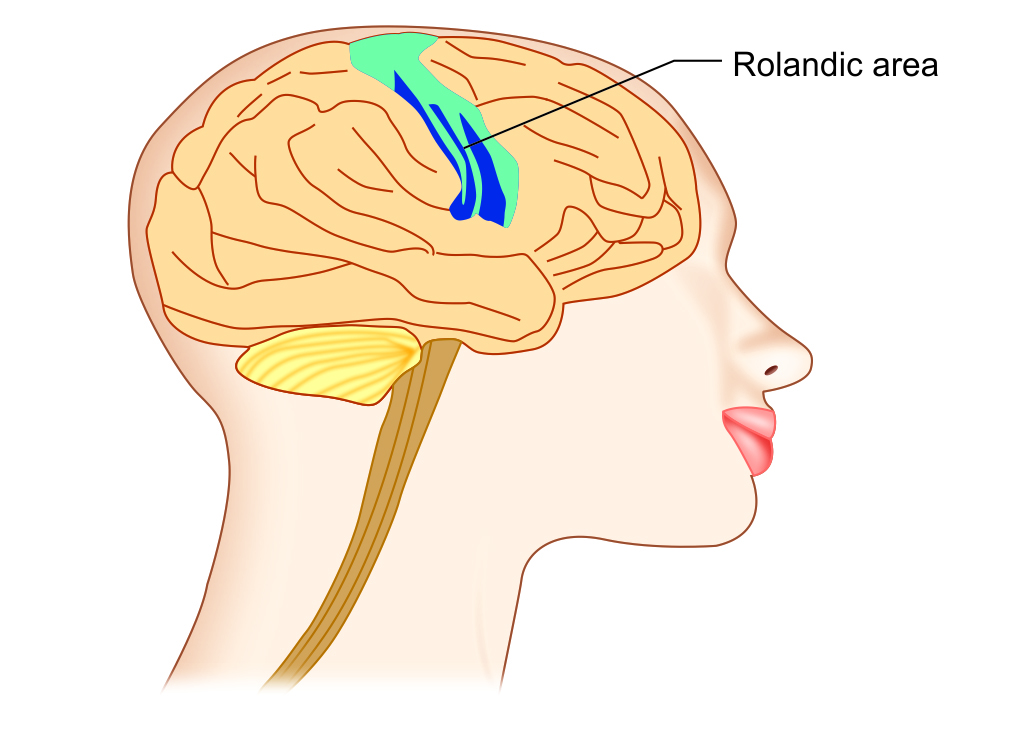 BRE is thought to be a genetic disorder, an autosomal dominant inheritance. Studies suggest that certain regions on chromosomes 11 (11p13) and chromosome 15 (15q14) may be involved in BRE, but a specific gene has not been identified.6

Are frequently contained entirely within this lower lip or spread to the ipsilateral hand. Sensorimotor manifestations are clonic contractions that occur suddenly, continuously, or in bursts, usually lasting a few seconds to a minute.

Oropharyngolaryngeal ictal manifestations: Inside the mouth, there are sensorimotor symptoms. Numbness and, more commonly, parenthesis (tingling, prickling, and freezing) are usually unilateral or, in rare cases, highly localized to a single tooth.

Arrest of speech is a form of anarthria: The child is unable to speak a single word and communicates only through gestures.

Consciousness and recollection: They are not affected and able to sustain in more than half (58%) of Rolandic seizuresd rowsiness.

Progression to unilateral convulsions or generalized tonic-clonic seizuresoccurs in around half of the children, and hemiconvulsions may be followed by postictal Todd’s hemiparesis.

Syncope-like epileptic seizures: They may probably occur as a concurrent symptom of Panayiotopoulos syndrome.

Duration and circadian distribution: Rolandic seizures are usually short-lived, lasting only 1–3 minutes. Three-quarters of seizures happen during nonrapid eye movement sleep, usually at the start of the sleep cycle or just before waking up.

Epilepsy can be difficult to manage. If a seizure starts as only a warning, nursing management should be the same as for the simple partial seizure (Fig. 2). 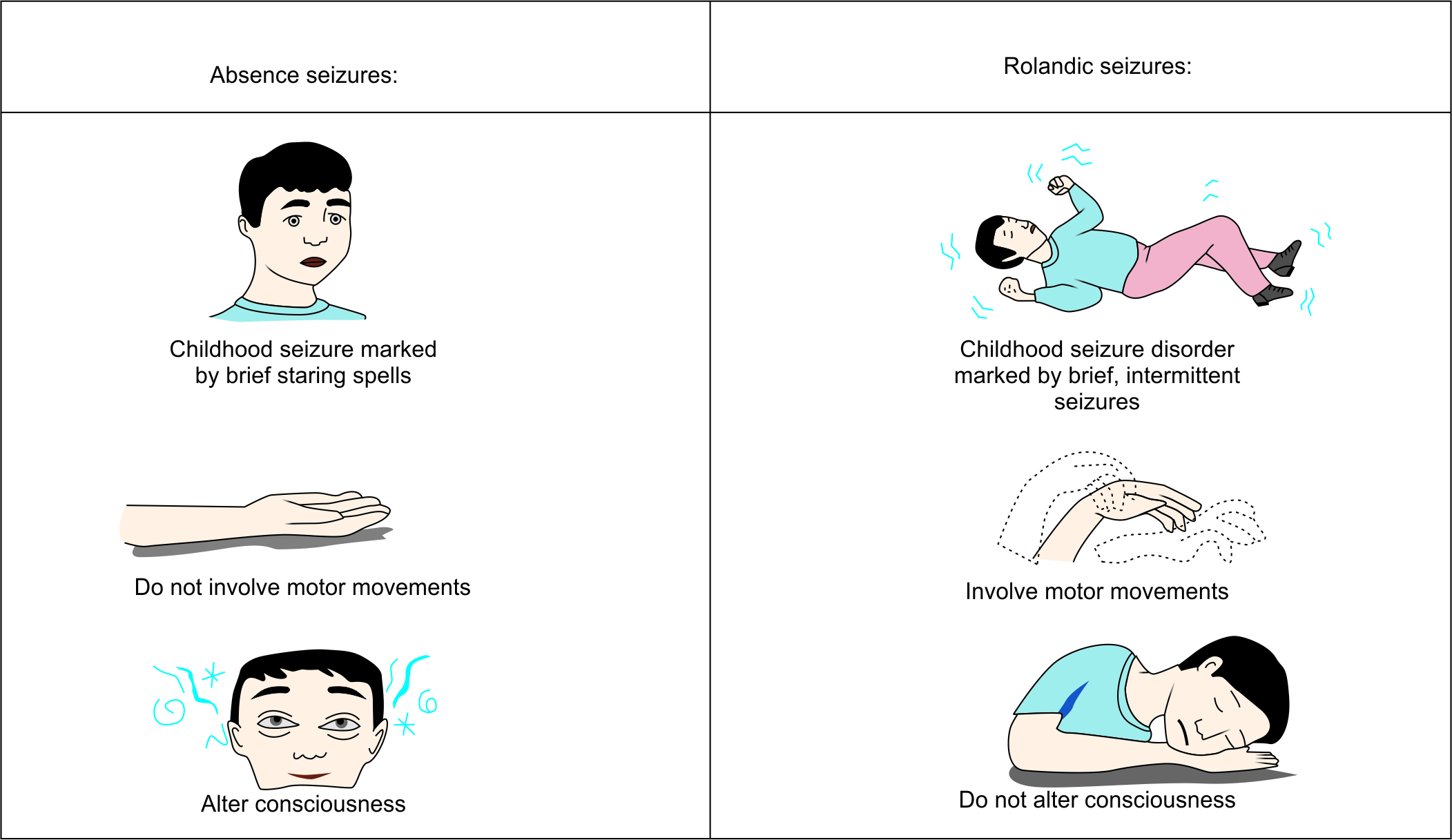 The child’s prognosis was better, after the medical management and further close monitoring; the childwas not having any complaints of seizure episodes. Child activity was good. He started interacting with his parents and healthcare team members. Then the child was shifted to the pediatric ward for 1-day observation. The child was apparently normal, no complications occur. The child’s parents were counseled by doctors about the child’s present condition and they had planned to discharge the child at home. Parents were educated by the staff nurse about the medications, follow-up, and diet for the child. If further episodes of any seizure, they were advised to immediately bring the child to the hospital.

BRE is a developmental condition, meaning that it evolves as the child matures. Certain symptoms completely resolve, like the seizures and the EEG abnormality. One hundred percent of children “grow out” of their seizures by the age of sixteen years. The EEG usually goes back to normal at around the same time, indicating that the tendency for recurrent seizures remains, about 1 to 2% over a lifetime.11 The treatment goal of the child with Rolandic epilepsy is the prevention of further complications. This is infrequent and harmless, and virtually all children outgrow the condition. These children usually have normal intelligence and development. It would be resolved by puberty. Appropriate counseling and identification will help to prevent the epilepsy.