Assessment of Knowledge, Attitude and Practice of Over-the-counter Drugs Administration by Parents to Children in a Selected Community Area with a View to Develop an Information Module

How to cite this article: Ponnambalam S, Raj A, Vengadasalam A, Munusamy A, Raja A, Vinayagam A, et al. Assessment of Knowledge, Attitude and Practice of Over-the-counter Drugs Administration by Parents to Children in a Selected Community Area with a View to Develop an Information Module. Pon J Nurs 2021;14(3):56–58.

Introduction:The trend of providing drugs by parents to children on their own, that is, self-medication has been increasing in the developing countries as well as in the developed countries in the recent years. This practice is more disastrous in children where dosages vary with weight or body surface. There are many reasons offered by parents for self-medicating their children. This study was undertaken to assess the knowledge, attitude, and practice of over-the-counter drugs administration by parents to children and to determine the correlation between the variables.

Materials and methods: A descriptive cross-sectional community-based study was carried out among 50 mothers having children in the age-group between 2 and 12 years. A structured questionnaire was used to assess the knowledge, a five-point Likert scale to assessthe attitude, and a three-point Likert scale to assess their practice. Data were analyzed using descriptive and inferential statistics.

Results: The study findings revealed that the common illness the mothers used to treat was fever (48%) and the common drug that was used was antipyretics (56%). The first reason mentioned by the mother for self-medication was clinic too far away 22 (44%) and, secondly, due to heavy consultation fees 16 (32%). Most of the mothers had moderately adequate knowledge and 42 (84%) of the parents had irrational self-medication practice. A positive correlation was found between knowledge and attitude at p <0.01.

Conclusion: Findings indicate a need to have routine continuous health education at the community level about the use of self-medications.

The use of medicines during illness by children is a major concern around the world.1 Drugs are commonly given by parents to treat their child’s illnesses.2 The trend of self-medication is prevalent in both developed as well in the developing countries in the recent years.3 The trend of over-the-counter (OTC) medicines use has grown steadily in the last few years. Inappropriate self-medication can lead to a rise in “drug-induced sickness,” death, and waste of government funds, as well as bacterial infections, hypersensitivity, and withdrawal symptoms.4

This practice is especially dangerous in children where dosages depend on the child’s body weight or surface area. On the one hand, the underdosage of a drug reduces its effectiveness and can lead to an increased risk of resistance to the drug. On the other hand, drug overdose can result in organ damage, mainly kidney and liver damage.5 Self-medication is still linked to the risk of addiction and misuse.

Ignorance, poverty, lack of functional health care services, high consultation costs in health facilities, a desire to take care of oneself, greater access to OTC medicines, the availability of drugs outside pharmacies, vigorous drug advertising, and inadequate family support have all been linked to the misuse of self-medication.6 The combination of various drugs, administration of nonprescribed drugs, misuse of prescribed drugs, and medication errors by mothers or caretakers can harm children’s health.

Despite the prevalence of this practice, there is a paucity of literature on the extent to which children are provided self-medication.7 Therefore, this study focussed on the parent’s knowledge, attitude, and practice of providing self-medication to their children when sick.

Statement of the Problem

Assessment of knowledge, attitude, and practice of OTC drugs administration by parents to children in the selected community area with a view to develop an information module.

The tool included background variables, such as age, sex, religion, residential area, education, occupation, type of family, family income, drugs commonly given as self-medication, source of information, type of illness, and reason for self-medication. A structured questionnaire was used to assess the knowledge on OTC drugs administration by parents to the children. A five-point Likert scale was used to rate the attitude, and a three-point Likert scale was used to assess their practice.

The Institutional Human Ethical clearance was obtained for the study. The objectives of the study were explained to all the samples. Demographic data were collected and then the mothers were assessed for the knowledge, attitude, and practice on OTC drugs with the use of structured questionnaires. The data were analyzed using SPSS version 20. Frequency, percentage, mean, standard deviation, and correlation were included in the descriptive statistics and Kruskal–Wallis test to determine the association between the variables.

The results revealed that with regard to age, the majority of samples 26 (52%) who were provided self-medication were in the age-group of 4–5 years. Most of the mothers had collegiate education 18 (36%) (Fig. 1). 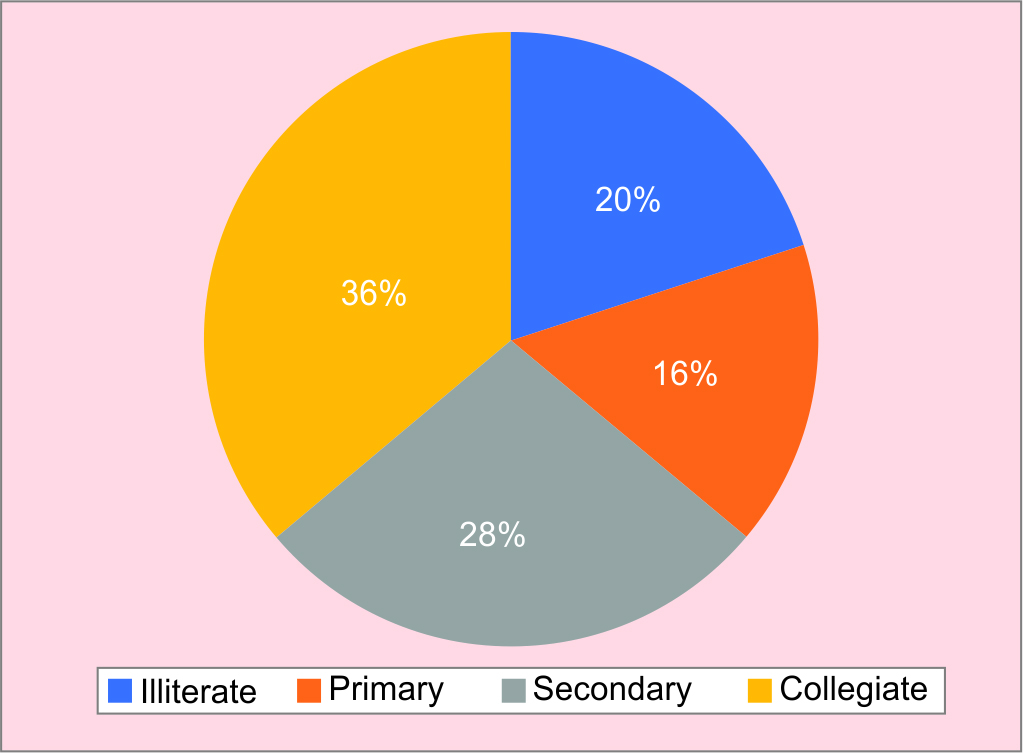 The drug that was commonly administered by the mother to their children was paracetamol 28 (56%), followed by cough syrup 32%. 30 (60%) of the mother stated that they used the previous prescription and the most common illness that they used to self-medicate was fever 24 (48%) and cough 30%. The first reason mentioned by the mother for self-medication was clinic too far away 22 (44%) and, secondly, due to heavy consultation fees 16 (32%).

Most of the mothers 35 (70%) had moderately adequate knowledge regarding the self-medication (Table 1). A positive correlation existed between knowledge and attitude at p <0.01 (Table 2).

The study findings revealed that the common illness the mothers used to treat illness was fever and the common drug that was used was antipyretics. This is supported by a previous study in Italy where the common drug that was administered by the parents was antipyretics.8 Even though paracetamol continues to be the drug of choice for treating diseases and injuries at home, it is also the drug most frequently linked to overdose and liver poisoning, both intentionally and unintentionally.9,10

The reasons cited by most mothers were that the consultation fee was high. It was consistent with a similar study where self-medication was found to be used by 45% of parents 3–4 times a year, with the main reasons being the perception of illness, previous experience, lack of time, financial constraints, and leftover drugs.11

The study also revealed that most mothers used the previous prescriptions for providing OTC drug when their child had fever, cough, and cold. In this study, most of the mothers had moderately adequate knowledge, regarding self-medication practices as the majority of them were graduates. In spite of their level of education, they self-medicated their child probably due to their previous experience and prescriptions which they possessed.

6. Balamurugan E, Ganesh K. Prevalence and pattern of self medication use in coastal regions of South India. Br J Med Pract 2011; 4(3):a428.